The new home for the ADF’s Joint Combined Training Capability (JCTC), was officially opened by the Chief of the Defence Force Air Chief Marshal Angus Houston on November 23.

The role of the centre is to enhance ADF force preparedness and bilateral high-end training such as supporting Mission Rehearsal Exercises (MREs) and major joint and combined exercises.

Calytrix is the Prime Systems Integrator for the JCTC and provides all of their simulation support services. ‘The new building is a very welcome addition to the JCTC as our members have moved five times over the past few years waiting for a permanent facility to be built’, said Steve Salmon, Principal of Calytrix Training Systems.

The JCTC integrates live, virtual and constructive technologies, to simulate combat realism at the tactical level and stimulate command and control systems at the operational level. For the opening of the new building Calytrix integrated facilities and simulation systems in Canberra, NSW, South Australia and the United Sates to demonstrate a simulated Joint Terminal Attack Controller (JTAC) exercise.

The next major joint and combined exercise support event for JCTC will be Exercise Talisman Sabre 11 to be held in July next year, while support to MREs will commence again early in 2011. 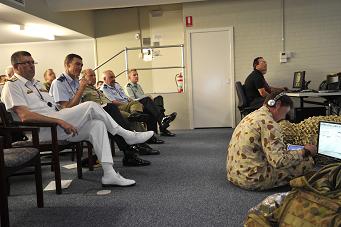 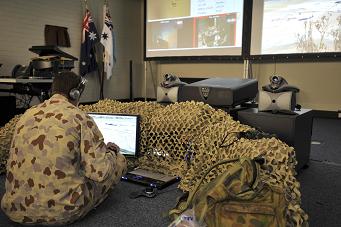 Chief of the Defence Force Air Chief Marshal Angus Houston watching a simulated JTAC exercise during the opening of the JCTC. Technical support being provided by Mr Brad Walton.