Calytrix Technologies (Australia) has recently assisted in the development and delivery of two country-level disaster response exercises for the United Nations' World Food Program (WFP) in Manila and Jakarta.

The two exercises represent the first time that the WFP's Disaster Management Interoperability Simulation and Training (DeMIST) software suite that has been used to support realistic in-country training for WFP staff.

Based on Calytrix's Exercise and Operations Network (EON) software, the DeMIST capability has been developed by Calytrix Technologies to support both operational and training activities for the UN WFP and partner agencies across Asia and other WFP areas of operation. The recent exercises involved up to 20 local WFP staff from each country office in a real-time simulation involving the early stages of a response to a widespread natural disaster.

The exercise players were exposed to a range of new capabilities inherent in the DeMIST system, including collaborative planning tools, information sharing environments as well as a 3D visualisation of the unfolding disasters. 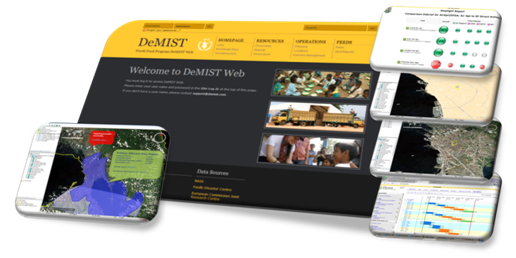 Some of the many tools in the DeMIST System

Throughout the exercise, the participants were exposed to a range of exercise injects, delivered by the DeMIST system, which tested their ability to respond to a developing disaster and to use the systems to share and represent critical information.

Feedback from exercise participants highlighted the value in providing a realistic scenario to provide a much clearer grounding and understanding for all concerned how the systems and processes can work together to ensure an effective response.

Calytrix Project Manager, Matt Moncrieff, said that, "Based on the successful delivery of the first training events, Calytrix and the WFP are now working on final delivery and acceptance of the DeMIST software. Beyond this, we are working towards supporting a much larger exercise in Manila which will involve up to 25 UN and NGO agencies and over 120 participants accessing and using the system."