Calytrix Technologies' (US) Canadian partner Acron Capability Engineering recently completed the integration of the Serious Game application VBS (Virtual BattleSpace from Bohemia Interactive) to JCATS (Joint Conflict And Tactical Simulation) for the Land Force Quebec Area Simulation Centre at Canadian Forces Base (CFB) Valcartier, Quebec. The integration project used the Calytrix "LVC Game" application to provide the interface between VBS1 and a HLA 1516 federation. Acron used the Synthetic Environment Development and Exploitation Process (SEDEP) to design and implement the simulation used for the project and also developed the scenario to prove that the interface worked.

John Nicol, Acron CEO, said "Using LVC Game was quick and relatively intuitive, making the implementation of the resulting simulation straight forward. We (Acron) only really had two weeks to do the integration because we received JCATS and the terrain area very late in the project. However, because LVC Game was easy to use and implement, it took a lot of the risk out of the project and we were still able to integrate on time".

Major Ben Cote, the Director of the Simulation Centre added, "Connecting VBS to JCATS now provides us with the ability to train up to 100 to 150 people, with individual soldiers participating in the simulation. Previously, we were only able to train the commanders and certain key personnel in this type of environment due to the cost and complexity of the simulators available. The use of VBS connected to our existing simulators means that a whole new level of training is available to us."

The JCATS to VBS integration project lays the foundation for the use of VBS with existing simulators currently in use within the Canadian Forces. Exercises are currently being planned that will further develop this capability. Acron is very pleased to be involved with these exercises and at the forefront of Serious Games integration.

The icons with circles are VBS entities appearing in JCATS. 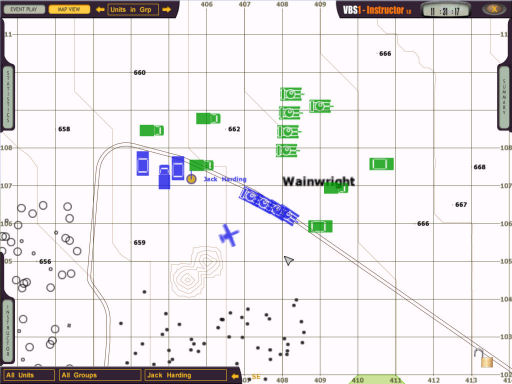 The green icons above show the JCATS entities appearing in VBS.