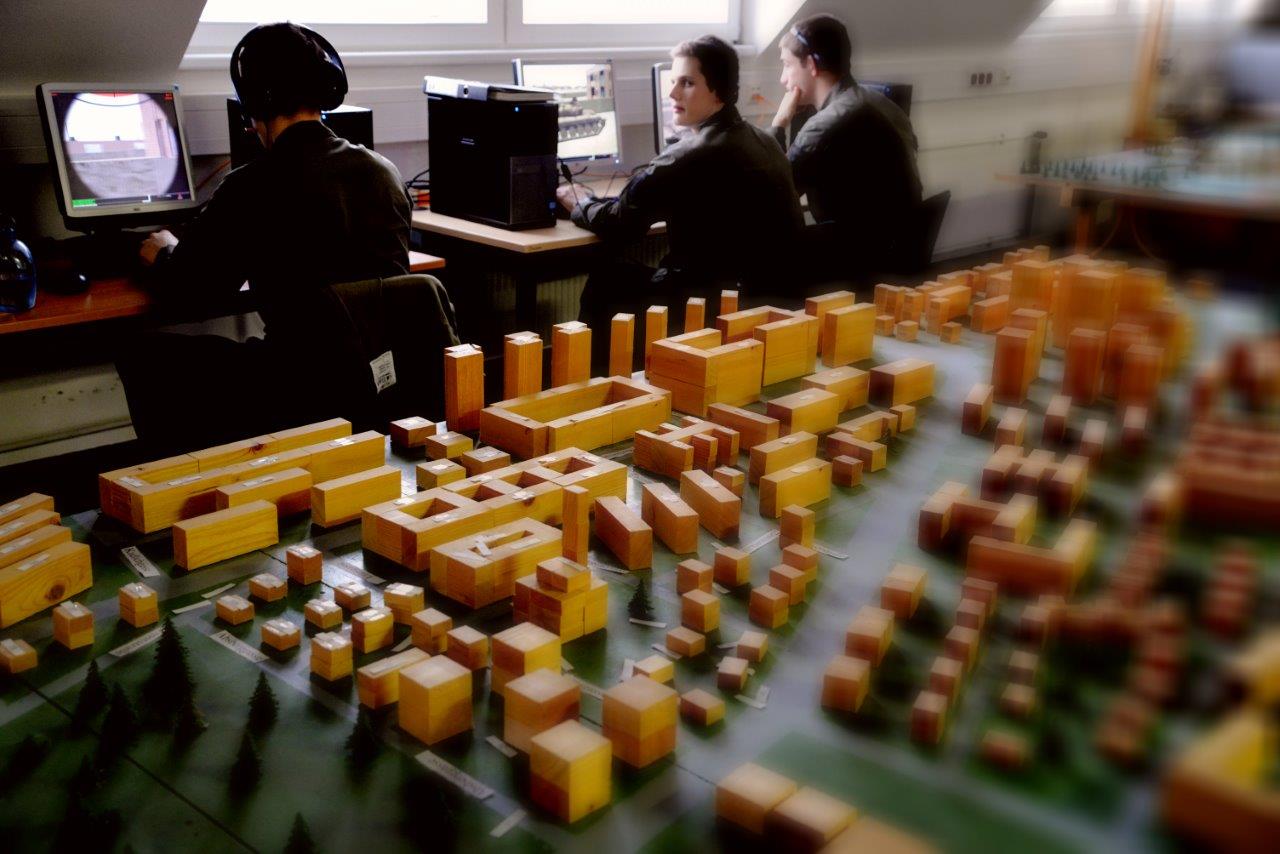 Designed and supported by Calytrix, the goal of this initial Workshop was to test and refine the training value of integrating the Steel Beasts Pro (SB Pro) tank simulation environment from eSim Games as the primary simulation and planning tool with the Virtual Battlespace 3 (VBS3) system from Bohemia Interactive Simulations for infantry support. The virtual environment focused on dismounting and mounting on infantry and vehicles between the two systems while executing combined tactics in the assault on opposing forces played by a dedicated red cell.

Underpinning the technical experiment was the integration of SBPro and VBS3, allowing the strengths of both strengths to be leveraged in an integrated training system. For example the damage and vehicle destructibility models used in SBPro is more accurate than VBS3, yet the infantry in SBPro is not designed to allow true First Person Players (FPP), hence students used the most appropriate tool for their role in the system to ensure the best training result.

At its height the Workshop combined 50 players from 3 nations in a combined tactical scenario with instructor lead teaching and facilitated debriefs. The systems were configured for the first time over a two day period with a further two days for virtual training. Once operational all systems proved reliable.

As Blue forces advanced on the enemy positions during the final scenario of the Workshop it was obvious that despite the technical integration focus of this first event the training audience had gained an understanding in the application of combined tactics. While the training potential was evident the systems also logged just over €400k of munitions, fuel and damage costs in the final afternoon of simulated play, again reinforcing the potential gains in the use of virtual technologies.

Although this was primarily a technical feasibility test/experiment the focus shifted very quickly from Technical to Tactical/doctrine related issues, mainly driven by the excellent IT-network-hardware and engineering support by the Austrian Army freeing up time that otherwise would have been used to debug technical issues. The results were very encouraging and are an excellent foundation for future LVC workshops that could involve integration with tank-cabin-trainers, LVC Cost Counting, C2 systems, and other nations.

Based on this success planning for the next virtual exercise has already begun, including the integration of full mission tank trainers, virtual air assets and live C2 feeds. For the Austrian Army the application and value proposition of virtual training is clear, reinforced by a need to rapidly refocus on the evolving operational demands around the corner.